Difference between revisions of "Talk:Harmonium"

Here are some initial configurations for the Game of Life mode. If left alone, these seeds will evolve following the rules of John Conway's Game of Life. Feel free to post your favorites:

I like it! It's groovy. I was never good at that life game though, so I'm not clear on how the rules work.... But the Windows version of the Life game had those preset patterns you could load, and they would oscillate or fly around and do stuff. It would be cool if you added in some of those patterns that could be loaded and ran to see what kind of music they would produce. I'll have to try inputting some of them manually.... --Mr. Reaper 04:22, 20 May 2009 (UTC)

Ok, some of the patterns are fun to watch, but they run very slowly compared to the Windows game. It would be great if there was a way to adjust the tempo. Like, press Right on the control pad, and the notes play faster and faster. Press left and they play slower. --Mr. Reaper 14:59, 20 May 2009 (UTC)

Thanks! - my kids should enjoy this one. Makes me think a "fruityloops" type sequencer/drum machine hack would be lots of entertainment Vladhed 15:16, 20 May 2009 (UTC)

Please add a save feature!! Also I made a mid-time solution : Harmonium Grid. Just download the file, and color the white tiles in Harmonium yellow in the picture. Then you can just re-upload it under your name. Pleas use .png EVER! --WiiCracker 17:36, 20 May 2009 (UTC)

Thanks for the feedback everyone (from here and other forums). You've given me some good ideas. I will be implementing save/load functions as well as tempo modulation and grid shifting in the next version. I can't promise a release date, but I don't think it will be too far away. WiiCracker, I think sharing grid patterns is a great idea. I don't want to flood wiibrew with files though. How about using something like the grids above? It might not be pretty but it gets the job done and doesn't require uploading a file. Well, that's it for now. Thanks for trying out the game (btw, that seed is one of my favorites). -- MetaFight 02:10, 21 May 2009 (UTC)

After watching some patterns, I realized I wanted to be able to step backward to see where they came from.... so... that would be another neat feature. The game would have to remember each step it made though, or at least a set number of steps (basically, and Undo function). --Mr. Reaper 15:42, 21 May 2009 (UTC)

My brother tried it, and made a suggestion: it should have a counter that shows the number of gernerations that have passed. --Mr. Reaper 22:54, 23 May 2009 (UTC)

I like the ability to shift around the grid with the d-pad. The other additions seem to be working well too. I think would prefer the functions that are assigned to the 1 and 2 buttons to be moved up to the d-pad though, like B + Right is increase Tempo, and B + Left is decrease. B + Up/Down could cycle through the game of life modes. It just kind of makes it easier to have all the controls around the same area, and the 1 & 2 buttons don't really need to be used yet, until you need some controls for Saving & Loading.... This would also greatly benefit from some on-screen information display. Just some visual indicators, like having the big frame around the grid turn green when you are in the Life mode, and grey when in regular mode. Some kind of little graphic to indicate which Life mode you are in, or what "speed" (tempo) you are at would be nice too. If there is room, some little graphic or text showing what buttons do what functions would be helpful on screen rather than in the pop-up menu (similar to the old version). When the user presses the B button, the information could change on the screen to show the new functions of the B-shifted buttons.... A suggestion: If you are in the Life mode, and you press the button to go to a Previous/Next Generation, it should automatically switch you back to Standard mode and do that. --Mr. Reaper 00:10, 14 June 2009 (UTC)

I'm trying to keep the controls as simple as possible for younger users. Having to hold B for some commands might already be an issue. I'm worried that holding B and using the D-Pad might be too hard for small hands. On-screen-display is on its way. That's why I cleared the left side of the screen :). Unfortunately there is no room for button-actions descriptors. Hopefully, the information button will be clear enough. As for switching back to Standard (or classic) mode on history navigation, I've implemented that for Back only since Forward would get you nowhere anyway ;). Thanks for the input -- MetaFight 15:36, 16 June 2009 (UTC)

Well, I figure that holding B and pressing the d-pad with the same hand is no problem for any size hand since those controls are all at the top of the wiimote, but holding B and pressing 1 or 2 actually requires two hands instead of one, making it more difficult by default. What resolution does this display in? I'm just curious to see how many pixels there are to work with to see just how much info might be packed into the blank area on the left.... --Mr. Reaper 18:08, 16 June 2009 (UTC) 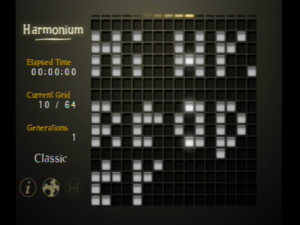 I'm also working under the assumption that the A, +, and - buttons are those being used most. I put the functions people would be using the least on the D-Pad and buttons 1 and 2, that way the game can be played without having to move your hand around. The screen real-estate is 640x480. This leaves roughly 180 pixels on the left side. Keep in mind, however, that for the data to be of any use it must be legible. This means it's hard to put more than 3 or 4 things over there. I've attached a picture of the current UI candidate on the right. -- MetaFight 18:52, 16 June 2009 (UTC)

I'd love to see some functionality for some additional instruments, and perhaps some basic animation support, such as can be found on a Tenorion. You can see a great video of the tenorion in action by artist Little Boots here. --IanWatson 19:27, 21 May 2009 (UTC)

I'm considering adding more instruments, but that would require some code rewriting so it'll take some time (see my other comment below). As for animations, I think that's a great idea! Check out André Michelle's implementation. He's got some groovy animations there that I'll eventually try to mimic. I like what the Tenorion does too. I'll look into that as well. -- MetaFight 05:41, 23 May 2009 (UTC)

Thanks! Tenorions cost about $800 US these days, and while I don't intend to go DJing anytime soon, it would be nice to have one I can play around with, and Harmonium looks to be off to a great start in that direction. Keep up the excellent work! --IanWatson 20:52, 25 May 2009 (UTC)

So my kids (aged 10, 11 and 12) played with this for over an hour yesterday! They quickly figured out that it uses a pentatonic scale ($$ for piano lessons sort of paying off) so no "twinkle, twinkle, little star" but enjoyed coming up with some groovy syncopated loops. "Dad can you hack this to make drum sounds?" When can I have a gander at the source? I have devKitPro installed already and have tonnes of drum samples in .WAV format.

This is favourite of mine as it reaches an equilibrium that alternates between two patterns: [EDIT: Moved to Equilibrium under Game of Life seeds.]

Cool! That's great to hear :). I still have a few tweaks to perform before I can release the code, however.

At the moment, when a column plays it is actually playing up to 3 sound buffers (5 notes + 5 notes + 6 notes = 16 notes) and, as such, uses up to 3 channels. In order to allow for tempo changes and for the addition of new instruments I'm going to have to rewrite the software mixing so that each column only uses one channel. This is because the sound library I'm using (Asnd) is currently limited to 16 channels and these get used up pretty quickly. The 6 note buffers are software mixed from individual note samples on startup (1 sample per note in the octave, plus the octave). This leads to 2^6 - 1 = 63 sound buffers (since we don't need the empty sound). Scaling this up to 16 notes would require 65535 buffers! Therefore I'm going to have to scrap this approach and have column sound buffers software mixed on the fly. I don't see this being too much work.

What will be a lot of work, however , is fixing the timing bug. I'm going to have to do a little bit of homework before I can tackle this one. So, in short, I'll put the source out as soon as I can, but I can't say exactly when that will be. Thanks for the interest in the project, and I'm glad your kids are enjoying it! -- MetaFight 05:41, 23 May 2009 (UTC)

Excellent program!! This is really fun - is there a way to somehow make it so that you could drop the bottom x lines by x octaves, maybe? Some sort of setting or something for that would be great..everything up high is nice, but it'd be fun to also be able to mke some bass lines underneath. Anyway - great game so far! Can't wait to see where this goes from here!! Buddypepper 21:56, 12 June 2009 (UTC)

Yeah, I could probably put that in, but I would need new/more samples first. Right now the entire game runs on the same vibraphone sample for its entire range... this, unfortunately, makes the top sound tinny and the bottom sound woofy. If I were to drop the lower end even more it would sound terrible. I am looking for better samples so your suggestion is still a possibility. Do you know of anywhere I might get free vibraphone samples? Thanks -- MetaFight 15:28, 16 June 2009 (UTC)