Difference between revisions of "Video output"

The Wii is capable of analog video output to a television, using either of the following connecting cables:

For PAL Wiis (sold in Europe and Australia), the following video modes are available:

For NTSC Wiis (sold in USA, Canada, Mexico and Japan), the following video modes are available:

Many homebrew applications have suffered from poor support for different PAL modes. These problems can largely be avoided by using the appropriate functions within libogc to use the video mode which the user has selected from the Wii system menu.

It's not sure whether RGB output is only available in PAL version or if the AV Encoder chip can be configured by software to switch between S-Video and RGB signal outputs. Indeed, earlier Wii homebrew applications would display wrong colors (satured red) on PAL Wiis when using RGB cable and libogc usual video mode (EURGB60), which seems to indicate that S-Video was indeed output. This was fixed by adding proper configuration of the AV Encoder chip. 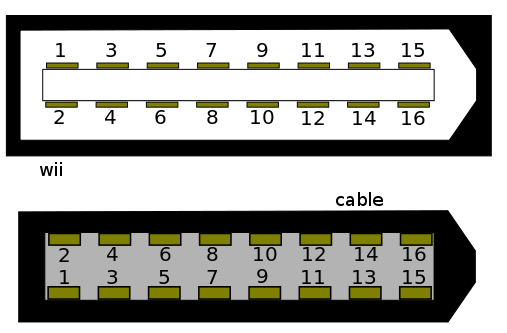