From WiiBrew
(Redirected from UsbGecko)
Jump to navigation Jump to search 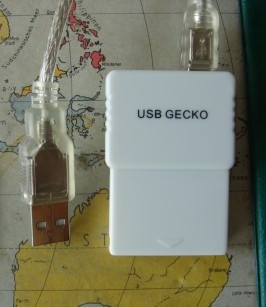 The USB Gecko is a Wii/Gamecube development and hacking tool which connects to the USB port of the computer, and to the GameCube memory slot of the Wii. It can be used to upload homebrew, to use your computer as a remote terminal under Wii Linux and as a remote debugging tool.

See Gecko OS for the Hombrew application to launch a game and be able to debug it remotely using this device.

The manufacturer has stopped producing these, perhaps due to legal pressure from Nintendo. As of 27 October 2010 there appears to be a new version called the USB Gecko SE which might be available. See the link at the bottom of the page.

The USB Gecko will usually be recognized as a USB to serial port converter and a device file of the form /dev/ttyUSB0 will appear. Simply writing to and reading from this device file will send data across the USBGecko link.

Failing that, userspace tools could use the libusb library and usb_bulk_write and usb_bulk_read functions. The USBGecko will appear as 0403:6001 in the lsusb output. 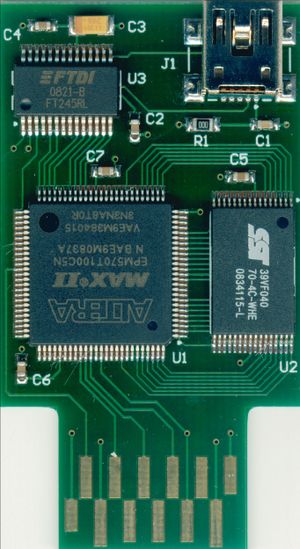 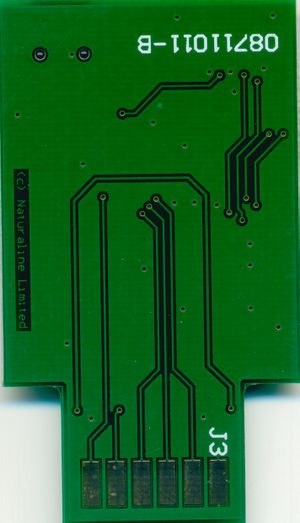 The USB Gecko is a two step converter to convert EXI<->serial<->usb. It is a fancy serial port. All the fun is provided by software. The EXI interrupt cannot be triggered from the PC because the pin on the Wii side is left unconnected. In theory one could open up the USB Gecko and run a trace from that pin to one of the many unused pins on the CPLD, reprogram the CPLD, and be able to trigger the EXI interrupt from the PC side. This can be seen in the image at right.

The Gecko has 3 chips:

The PC side sends bytes over to the Wii to control the installed code handler. The code handler takes care of interpreting the cheat code virtual machine which can be used to play games with infinite lives, health or whatever hack a person might desire. The code handler also has functionality to support debugging functions, such as setting breakpoints, viewing or writing memory, or pausing a program in progress.

The codehandler on the Wii side is inserted in some commonly called function like the function to wait for vertical blank. When it gets a chance to run, it performs the virtual machine functions of interpreting the gecko codes, and services the debug commands pending on the EXI port if any are ready.

The debug command codes all start with a byte to indicate what the command is, and the command byte is followed by zero or more bytes of associated data. Here is a list of codes. The byte values are in hex (base 16), so if "10" appears it isn't ten, it's sixteen. The codes seem to be loosely organized in binary coded decimal.