The BootMii Platform is a boot2 hack, which is loaded by boot1, which is loaded by boot0. boot0 is part of Hollywood and read-only. boot1, although stored on the NAND, is signed by a value in write-once memory and therefore cannot be changed. boot2, however, can be modified. This means it can be hacked, updated, and corrupted. BootMii hacks boot2, and allows running code directly from SD Card, before anything else is loaded. This has many advantages, such as making it very difficult to brick, and slowing Nintendo from blocking homebrew. Unfortunately, the only way we could completely stop Nintendo from blocking homebrew is by patching updates on-the-fly, or somehow preventing overwriting boot2. 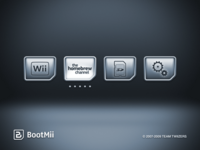