This article needs major expanding and there are plenty of errors! 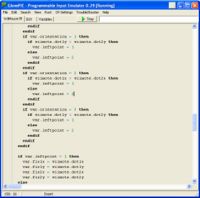 Glove Programmable Input Emulator (GlovePie) was originally created by and is currently maintained by Carl Kenner. It is a current "driver" for the Wii remote. Not many software packages can use a Wii Remote's input data so GlovePie works by taking input from one device (example Wii Remote) and translates it into fake inputs from another input device (example mouse). It uses a language much like basic. Example code:

That code tells the computer this: when ever the Wii Remote's "A" button is pressed down it will have the same effect as pressing the right mouse button. This doesn't work in reverse. Here is a truth table for that code:

As far as I can tell Carl Kenner holds all licensing.