Difference between revisions of "MPlayer CE"

Not to be confused with MPlayer TT or MPlayerWii.

Mplayer CE is a fork of the Team Twiizers MPlayer port, combining elements of MPlayerWii and GeeXboX. 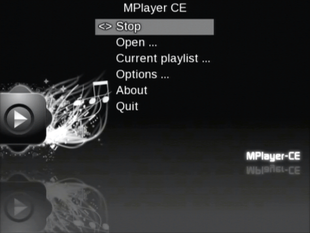 To read DVDs and to read external drives at USB 2.0 speeds you will need the custom cIOS USB2 modified by the Mplayer CE team which can be found here. For more help installing this cIOS see the MPlayer CE wiki.

Copy the "mplayer_ce" folder into the "/apps" directory on your sd card and launch it via the Homebrew Channel. Do not rename the folder.

Installation of the cIOS with/without Wifi

You need to install the USB 2.0 cIOS from here (Please note that this requires a internet connection). There is a offline instalation available, to read the guide, visit: here The installer is for Homebrew USB2 only, this will install IOS202 using base IOS60 and IOS36 automatically. You can select the IOS to use to do the installation, so you can select a IOS with the fake sign bug. watch it download, install incase it fails and returns to HBC, it should now install successfully. (IOS60 and IOS36 are downloaded to SD via the Nintendo's Update Server). We are using IOS60 as a base as there has been improvements in wifi. Those that install this cIOS do not require a DVDx instalation.

There is a work around for this but requires you to downgrade a certain IOS, to be able to place trucha into another. Trucha Bug Restorer is an application in which to get IOS with the trucha bug back on all Wiis (and new) with system menu up to 4.1. Usually the error codes -1017 and -2011 indicate that the trucha bug is required and missing. Make sure you understand what you are doing before using this. Only use it if you have an idea what the trucha bug is and why you need it). For more information regarding this, and the download, visit: here

Once complete, Download the cIOS Installer for USB2 here and choose IOS36 as the IOS in the selection screen, then Press A to install, watch it incase it fails and returns to HBC, it should now install successfully.

If you plan on updating make sure to install the cIOS and DVDx before updating.

You can use a wiimote or a gamecube pad to interact:

HELP! Some files play back choppily!

Are you trying to play an h.264 encoded video and/or high definition video? The Wii just doesn't have the hardware to handle it. For more information, see http://code.google.com/p/mplayer-ce/wiki/h264

Turning off frame skipping makes some files play back smooth but the audio goes out of sync!

The Wii is just not powerful enough to handle high compression/high definition content smoothly and still keep the audio in sync.

Most devices are supported by the library being used to provide usbstorage access, but some do not work due to various reasons such as noncompliance to standards. Such devices usually require special drivers to work and it would be an arduous task to track them all and write support for all of them. You can blame the manufacturers. Also some drives have a bad detection, try the following, switch on USB Drive, Power Wii on, Boot HBC and load MPlayerCE, and maybe the drive will have mounted. If not then we need to make improvements in ehci module etc. There is a usb test for you to try if you have a problematic drive, please report the result here.

My USB storage device is supported but I can't launch Mplayer_CE from it!

Assuming you are trying to launch Mplayer_ce from a USB storage disk using the HBC or similar loader and your USB storage device is supported by the loader but Mplayer_ce still won't load from it (even though you have already verified that all the needed files are on the USB storage disk in the correct places without any errors in them), then try reformatting the device. The problem is likely something to do with the file system on your USB disk.

Why don't my RM and RMVB files work?

For information on compiling, editing the config files and submitting your custom theme, please see the Google Code Wiki.

How to report a bug/issue

Feel free to submit links to your own customizations on Google Code Wiki.