Wii Solitaire is a very simple Klondike solitaire game for the Wii which makes use of the Wiimote's IR sensor bar.

The objective of the game, for those that are not familiar with solitaire, is to get the four suits built onto the foundations from aces up through kings. To do this you must place alternating colored cards, from kings down to aces, on top of each-other by moving them within the Tableau and drawing cards from the Stock.

The source is available, of course, and is fully commented throughout to make it easy for those reading the source to understand why and how I did the various functions for the game.

PLEASE READ THE RELEASE NOTES FOR THIS VERSION BELOW

Classic Klondike Solitaire that you all know and love.

Vegas Solitaire is essentially the same as Klondike Solitaire however you may only go through the deck once or three times depending on how many cards you draw at one time.

The same as Original Solitaire however you may shuffle the deck when it is whole. 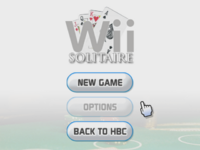 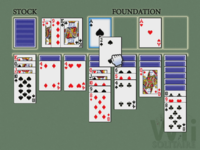 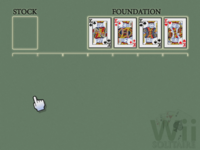 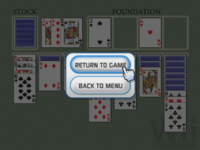 Scoring right now is, for the most part, useless. However, it is there, albeit mostly incomplete. It will also keep the time you have played the game for.

You can choose the number of cards that will be dealt out at one time from the Stock now. You may choose either 1 card or 3 card.

When you win, a little animation appears and you are called a Winner.

The Stock now "shuffles" before it deals each card out like you would a real solitaire game.

When you start up Wii Solitaire, if you have an SD card, you are asked if you would like to create an options file. Within this options file there are currently six options to choose from. Only three of the options have been completed and may be edited by hand: Deck Dealing Animation, Mouseover Rumble, and 16:9 Video Stretching. 0 = Off, 1 = On. The .ini is located in the same folder as the boot.elf file.

When you first use Wii Solitaire and if you created a new settings file you will be greeted with Playing Tips on your first game. These explain the essentials of Solitaire and provide a few tips to successfully complete a game.

Instead of the cursor having to be over a Tableau card or Foundation card to drop now the held card only has to be touching the Tableau and Foundation cards to be dropped. This really refines the game play making it a lot simpler to control the cards.

The cards on the Tableau now adjust vertically so that when there are less cards in a column more of each card is visible making identifying the cards much easier.

I made it so that if you are using a 16:9 TV the game will output a stretched 4:3 image to screen. Later on I will make this an option to turn on and off.

I recreated the cards used and properly scaled the cards for a more accurate looking game. I also replaced the old table background with a much cleaner looking version.

During development of the Menu I discovered a serious bug where one could select the empty home row and force the creation of aces within the game.

Because of the above fix, I quickly finished implementing the early stages of the menu system. You can now create a new game without having to return to HBC.

School is starting tomorrow and I expect a lot of my free time shall be inhumanely stolen from me. As such, I decided to release this feature-incomplete version to the public. I added quite a number of new features, though sadly at least a third of them are incomplete such as the options and scoring. You may see a rough score on Original and Vegas, however the scoring will be different for Vegas solitaire in the future. I am not releasing the source for this version because it is quite ugly and is lacking of comments. The game, however, is still completely playable and I hope the features I added pleases everyone. The releases from this point will probably get a little more distant, and I hope to only need to release at least one more pre-1.0 version before I can just start fixing bugs people find. Also, sound. It will not be implimented at this point in time because the sound libraries available are quite poor. sndlib seems nice, but the way it was released is just absolutely terrible. As such, it has been removed as a future feature.