Difference between revisions of "Wii mini"

The Wii Mini is a cheaper revision of the Wii, released in 2013. Due to the lack of an SD slot and internet capability, none of the previous exploits worked. Currently, the only working exploit is Bluebomb, which uses the USB port and bluetooth interface.

Many stub IOSes do not appear to be installed on the Wii Mini, which seems to be due to the fact that the Wii Mini does not perform updates from discs outside the factory. Installing older IOSes will most likely not work anyway, because all normal IOSes attempt to initialize the WiFi module on boot.

Ethernet can be enabled on the Wii mini by running Ethernet Enabler. This is due to the fact that the ethernet drivers are still present in the Wii mini, despite not being usable from the System Menu.

A normal Wii's System Menu can also be installed into the Wii mini. However, there are some bricking risks. To avoid bricking your Wii mini, be sure to follow these steps closely.

BootMii can only be installed as an IOS on the Wii mini. Additionally, BootMii requires an SD slot and reset button to be wired to the console, since USB is not supported. However, several people have done this before, and there are test points for the SD slot, which are shown bellow on the hardware diagram

Support for the Wii Mini can be found on Discord. 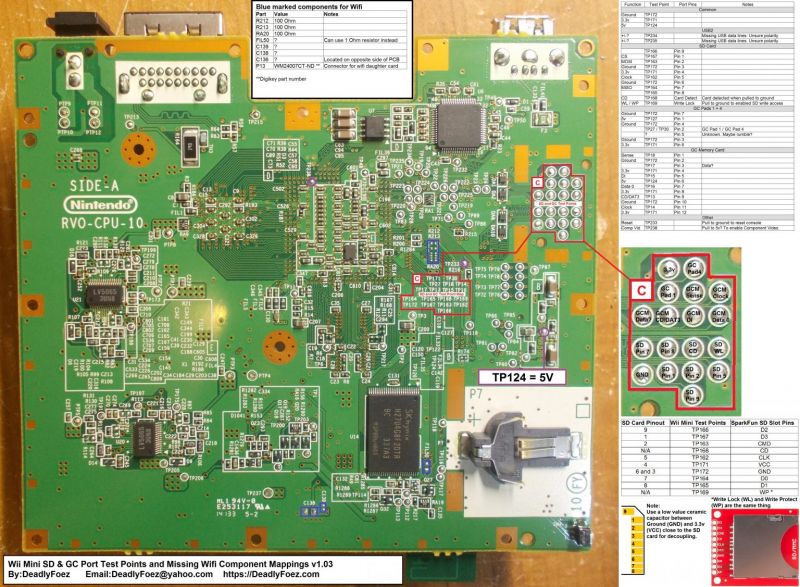