You can download a lot of sample songs via Karaokii Download Center or use Ultrastar ones. You can send Karaokii made by you by contacting me (see my profile) or in discussion page of this article. A form would be available soon.

All regular Ultrastar & deriv. '.txt' lyrics files are supported, so download any you like from the Internet, change the extension to '.ki3', converse '.mp3' to '.ogg' and if you want to you can use the album cover too by resizing it to 180x180px and switching to PNG format. Songs files must be named exactly the same as the karaoke file and album cover image. All media gets put directly into the songs folder, subfolders are only to be used for scripting. References in the lyrics to the image file (which are usually jpg) to the the newly converted png file. References in the lyrics to the mp3 will also need to be changed. Often there are several versions of the song such as lead or backup, choose one and name it as the main file. Finally cover images often have separate identifiers such as [CO] for cover art and also must be removed. 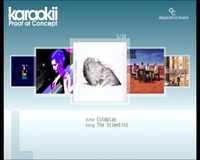 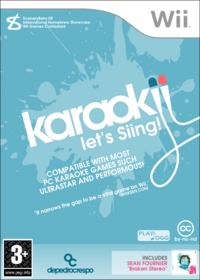