TWIST is a physics-based, puzzle adventure set in space. Or, at least it will be! This is a preview release with one level. This game has been created to test some bits of the game engine I'm working on. I'm putting it out to get some feedback/ideas for improvements, and because even in this state it's fun to play - and quite tricky! 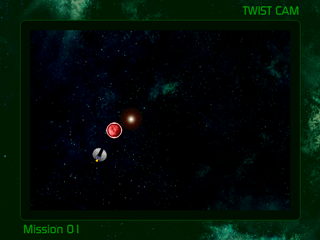 Twist around space clearing up all the space junk. Match up colours to destroy the blocks. You have little time so be quick!

This game is just a preview, I've not created any levels yet so you just have this first level... but it's still fun, and quite tricky!

To clear a pair of blocks one of them must have been 'activated' by coming into contact with your ship.

Hold the Wiimote on it's side like you're playing a retro game. Use the DPad to twist around. Push (2) to boost.

You can use the reverse thrust by pushing down, but it's not very strong on the basic ship that comes with this example level.

You can push (1) to fire away any blocks that have become stuck to you. This is useful if you get stuck.

Tap (A) to make your ship emulate gravity and pull in the blocks around you.

If you manage to clear most of the blocks a Star will appear when you have collected the few remaining blocks. You can push the blocks into the star and they will be destroyed and you can win the game.

This level shows the basic core physics. I'm working on a level scripts at the moment, so there will be various tasks that will make up different missions over increasingly difficult levels. I also need some simpler training missions. The main aim of the levels will be clearing blocks by matching colours. Some levels have a star that will destroy any blocks. The sequence of blocks is random, but could be configured in advance for different levels to match the difficulty level. Levels could have more or less blocks released at any one time. Levels can have different time limits.

I have different settings for the physics that control the ship - so it will be possible to either (a) let the player tweak their engines, or (b) have powerups or different ships available with different powers. The ship in this demo has quite slow acceleration, but an automatic reverse thrust to stop it flying around uncontrollably.

That's just a few of the ideas I'm working on, please drop me a line if you have any feedback or other ideas for improving the game!

I'm a programmer, not a designer. If anyone can help make killer graphics for this game please get in touch. I'm using a set of GPL sprites I found at the moment, but I would like to create better graphics in a cartoon style similar to games like World of Goo.

The music is from an old public domain disk of Amiga MOD files.