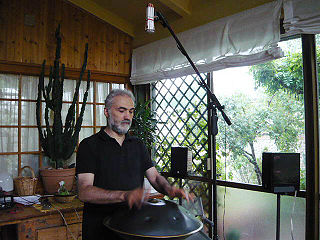 A New Way to Make Music

Having introduced Infrared Music, the Wiihang is a particular type of prepared hang drum, firstly developed by luthier Roberto Regazzi in the summer 2009, which uses the Nintendo Wii remote controller, or wiimote, to pair a PanArt "integral" Hang with one or more midi sound modules running from a computer connected to an external audio.

The ability of the wiimote to track simultaneously in position up to 4 infrared dots, as seen by its built-in infrared camera, is used in this system by means of special reflective rings applied to the fingers of the player which -independently from their angles- reflect in the form of a single dot per ring the light emitted by infrared leds added roundly at the wiimote camera surrounding zone.

The hang drums sounding zones are mapped by a dedicated GlovePie script, which sends suitable midi commands to the connected synth(s).

Adapted timbres and tunings are used in the background for a simultanous performance in realtime while hands and fingers are playing the acoustical hang.

This is suitable for Ambient, Techno or New Age mostly improvised interactive music and music therapy.

The Hang made by PanArt in Bern

to keep the Hang in position

to hold the Wiimote

How to Build One in Few Steps

Your computer should be fast enough to react in real time with your finger movements, but please keep in mind that particular timbres with long sustain and release are more suitable to complete the hang percussion when acted with infrared reflection.

Keep also always in mind that when you use 2 reflected infrared dots (with 2 finger's rings) they should be always visible by the wiimote. When one is not "seen", in fact, the first will be the only one tracked, even when it was intended to be number two.

The original GlovePie script can be obtained gift-or-freeware directly from Roberto@Regazzi.net.